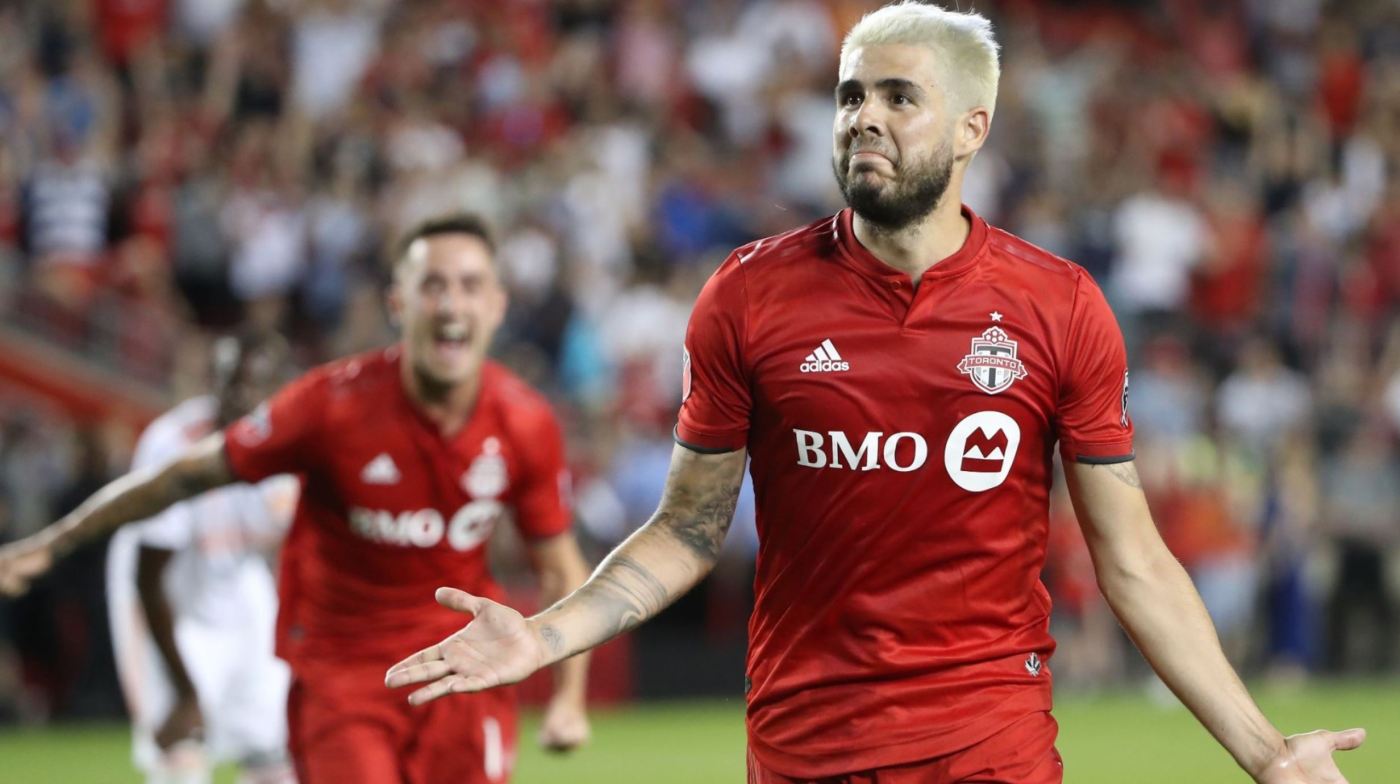 A cool/annoying aspect of Major League Soccer is playing during international breaks. This means you have to adapt your game plans when your best players are missing. In this case you got Michael Bradley and Jozy Altidore playing in the Gold Cup. So this means someone has to be the deep lying playmaker while another has to play as the main striker. It looks like they are going with Pozuelo as the striker which is interesting. Pozuelo has been a break out star this year. He is essentially replacing Giovinco and has done a good job. However he has been doing this mainly as an attacking midfielder. So how is he going to play in this game? You can either try and replicate Jozy or play more as a false nine and I would go with the later. He excels in space and creating so I would play him up top and encourage the wingers, in this case Endoh and Shaffelburg to get in behind or create in between the lines. I think all Fraser really needs to do is be very careful with the ball and make the simple passes down forward. Also I would try and attack one guy specifically on Atlanta, Brek Shea. Brek’s positioning usually leaves space behind and room to attack on the break. After winning the ball mainly on the right you got to try and attack that space first. On the defensive end I am mainly focusing on Julian Gressel. He is an assist machine and consistently creating chances regardless of where he is on the pitch. Pay extra attention to him with either DeLeon or Delgado and make it tough on him. Lastly I am pressing high against Brad Guzan and focusing on winning the second ball when they go deep. Guzan’s distribution has certainly improved but it still eaves a lot to be desired. Josef isn’t there to stretch the field and provide a threat over the top so I would play a high line and press Atlanta hard to create pressure because I think this lineup for Atlanta could give the ball away very easily.

I too am missing some players and for me that is the best player in the league in Josef Martinez. It looks like they are giving Brandon Vazquez his first MLS start which is pretty cool. This is a pretty low pressure situation between being short staffed and it being a mid-week game. I am mainly looking at Pity Martinez to pick up the slack. He comes to MLS with a huge price tag over his head and certainly has not lived up to it. But after a short Gold Cup break hopefully he has cleared his head and step up. He is playing on the right so he will probably look to find space in between the backline and midfield. Him against Ciman will be a great match up to watch. I am also looking at Nagbe and Gressel to be the other sources of creativity. Gressel is a super consistent player and seeing how creates up the middle as opposed to the wing will be interesting. But there will probably be a lot of fluidity with him and Martinez. As for Nagbe it would be nice to see him make some proactive runs with the ball from deep. I have never really been sold on him playing too deep in terms of defensive responsibilities but attacking wise he can possess the ball deep and push it forward. Lastly with so many people out I think it would be risky to commit to playing the ball from the back. Atlanta’s ability pass was a key attribute to their championship season last year. But with so much rotation in today’s lineup trying to play out from the back could lead to some costly turnovers.

What Happened: So right off the bat, Toronto scored a goal in the first minute. Usually the first few seconds of the game are pretty frantic and there isn’t much organization. In this case Atlanta was playing at like 70% while Toronto came out of the gates flying. A quick turnover in Atlanta’s half led to the goal. It just seemed as if every Atlanta was ball watching and slow to react. When Shaffelburg put his cross in there where more Toronto players then there were Atlanta players which is a really bad look. Toronto brought the pressure and when you’re the home team that can really have an effect on the other team.

One thing that was clear as the game progressed was Toronto attacking on the left mainly at Parkhurst. Parkhurst is a solid centerback but at right back he is playing out of position and is a liability. Good on Toronto for identifying a weak point and going after him. The penalty came after a run of play that saw chances go back and forth. I thought it was a penalty even though admittedly I prefer to have more hand balls called in the box since it is the fundamental rule of the game. Atlanta quickly capitalized on the goal adding another 5 minutes later. Toronto was comfortably on the ball but Ciman carelessly gave the ball away trying to pass it to Brek Shea. This led to a throw in to Vazquez who was able to beat his defender to the end line. He whipped in a ball and really hoped for the best which is usually the best option. Toronto was unable to clear it and Gressel hammered home the lose ball. The game usually finds a way to punish unforced errors. Then not to be out done, Toronto strikes back with an equalizer. This one was impressive. Toronto was passing the ball around on the right side, then they switch the ball to the left to a wide open Shaffelburg. He is wide open because Delgado is playing high and pulls Parkhurst away from Shaffelburg. Shaffelburg is disciplined and stays wide because he knows if switch comes, it does, he will be open. Toronto ran this pattern a few times this game it worked a few more times. He then whips it onto Pozuelo’s head and the game is tied. The game settled down after this flurry of scoring and a few things became evident. First off Pozuelo is a beast and has free range to do whatever he wants. He was dropping deep, and drifting wide but he was always creating opportunities. I feel like ever decisive pass was on point and created an opportunity for Toronto. He was definitely the best player on the pitch. Another thing of note was that both teams where doing much of their defending in the middle third of the pitch. Both teams were compact and organized around midfield. This meant that the only way to move forward was with either balls over the top or combination play on the wings. For the most part none of the balls over the top worked so there was a lot of play on the wings. Atlanta mainly played on the left mainly because Parkhurst does not offer much going forward. Toronto mainly played on the left as previously mentioned but also spent some time on the right. The last thing was the space in between midfield and defense. Both teams were finding that space and exploiting it. I would have liked to see an adjustment from either team and maybe drop in extra player deeper in midfield but that never happened. Now this game ended with some madness. Toronto was given a penalty really after Laryea tripped over himself. It looked kind of looked like Pogba may have clipped him from behind but I am not seeing that. Regardless, Pozuelo took his penalty with great compusre and slotted it by Guzan. However in incredible drama, the ball does not lie and Atlanta earns a penalty. On a set piece after the kick off. Martinez found Pirez who hits it across goal hoping for anything to happen and just so happens to find the of DeLeon. The referee had already whistled for full time. However VAR was still in play and he points to the spot. So now all Pity has to do is convert the penalty and I would say that would be a fair result. However he smashes it over the bar and Toronto gets the three points after an exciting game.